This morning, at about 11:15 a.m. EST I was sitting in my office preparing for lunch when a DM came across my Twitter from @islanderslegion:

"Just read the NASL press release, any news out of ATL about the Silverbacks coming back"

I was shocked, to say the least. I had spent October 30th up in Raleigh for the USSF D-2 Final telling everyone (most notably @PasionNaranja and @danielstroud) that in no way would the Atlanta Silverbacks be coming back for the 2011 season. They cited this press release and the fact that a "Atlanta 2011" image was displayed on the NASL website for some time.

The original plan for Silverbacks Park. This was considered to be Phase IV, where upon completion the stadium would hold close to 15,000 fans. Unfortunately Silverbacks Park remains somewhere close to Phase II.
When the Silverbacks decided to sit out the 2009 season I thought it was a good move. A 9th-place finish in the 2008 USL First Division and a general indifference turned off a lot of supporters, including yours truly. ReMax Greater Atlanta Stadium had seen very little progress towards being completed and rising costs for fans to attend games during the last two seasons of USL play made it difficult for me and many others to want to stay home. (I know, they made the final in 2007. I attribute that to luck more than anything. That team was painful to watch in person.)

Although the Silverbacks didn't field a team in 2009 or 2010, the park was still being used for amateur leagues almost every day of the week. I played in a Co-ed league from 2006 until earlier this year, so I got to see the lack of progress and the lack of upkeep of not only the surrounding fields but the stadium as well. It seemed as if the Silverbacks ownership had given up on trying to finish the stadium project and said we're going with what we've got.
Add into that the disastrous flooding in September of 2009 which completely engulfed the park, seeing as it sits in a low-lying area. 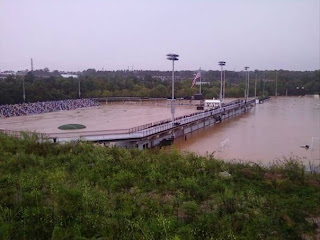 This picture was taken from the "parking lot", the rock hill which looks over the whole park. The huge mass of water on the right is completely covering the other two fields. I estimate the height of the water at 7-8 feet.
With an ownership group not interested in fielding a professional team, there hasn't been a pressing reason to finish construction, upgrade the facilities or even complete the adequate cleanup after the flood.

I must say that until today we saw it as a virtual impossibility that the Silverbacks would return in any form or fashion in 2011. In the last press release on the Silverbacks' website, released November 10, 2009, the final sentence states:

"The Atlanta Silverbacks will not be playing in the 2011 season and there will be no tryouts until further notice."

Yet there it was today, clear as day on the NASL website.

"The meeting was highlighted by the approval of two additional teams for the 2011 season - the NSC Minnesota Stars and the Atlanta Silverbacks - and their inclusion in the application to the United States Soccer Federation for sanctioning as a Division II league."

I still can't believe what I'm reading and it will probably take a night of sleep for it to sink in. The Atlanta Silverbacks are coming back, like it or not. And how do I know they're coming back? After a couple long conversations with @Longshoe today, here's what we deduced:

NASL had to have 8 teams. We rationed that NASL went to USSF with 6 teams and they said it wasn't enough. Montreal, Puerto Rico, Carolina, Tampa Bay and Miami were the holdovers with the strongest ownership groups. Edmonton FC has been steadfast in moving forward to joining as an expansion team in 2011.

That left two more teams to sign up. The financial problems of the NSC Minnesota Stars are well known and Boris Jerkunica, owner of the Silverbacks, had made it clear he was not willing to continue losing money by fielding a professional team, his main reason for not fielding a team the last two years. From this we can only conclude that one or more outside partners have stepped in and committed to helping both Minnesota and Atlanta financially in order the the NASL to be certified for play in 2011 by the USSF.

We were as blindsided as everyone else. We have heard nary a peep from anyone in the Silverbacks community recently, which was the main reason behind my declarations in Raleigh that the Silverbacks would not be returning any time soon. The economy has not improved dramatically, construction on the park has been stalled for years and now the Silverbacks have almost completely lost any footprint they had on the Atlanta soccer scene.

If NASL is to proceed as a eight-team league, the Atlanta Silverbacks will almost certainly be one of those teams. However, the daunting task of fixing the park, finding sponsors, hiring a front-office staff, hiring a coaching staff, promoting the team, and most importantly, complete a roster seems almost too much to complete in a such a short time span.

In the days and weeks to come there will certainly be more information forthcoming, at which time we will definitely share with you.
Posted by thechrismartz at 7:16 PM No comments:

With the potential return of the Silverbacks, we'll clear the mothballs off the Cupcakes and try to figure out what is going on...

All the word on the street was that IF Atlanta returned to pro soccer, it would not be via the Silverbacks. The last few years of the pro team were not successful financially and things didn't look viable in the future. Rumors were that other investors would be necessary to make it happen.

Two years have passed since the Silverbacks took the field. USL-D1 has imploded and now we have the NASL. Same idea of a national 2nd division with the same type of costs...

Rumors in Minnesota have Traffic (owners of Miami FC and doing big business in Central & South America) providing funding for that club to return. Pure speculation here, but could Traffic be funding Atlanta as well in order to provide a league for its many players to gain experience in? From a player development and sales standpoint, it could make sense for Traffic to essentially control the market.

I'm sure this will be updated as events unfold. Be on the lookout for more about the return of pro soccer to Atlanta.

UPDATE: For what it's worth, the official site hasn't been updated yet beyond the NASL announcement at the beginning of 2010.

Test Run for Bring Back the Stripes LIVE

Let's see how this works...

Posted by Longshoe at 9:35 PM No comments:

MLS Week 2: The Round Up

Posted by Longshoe at 9:31 AM No comments:

Are you kidding me?

A 4-0 loss on Opening Day does not typically signify a good season coming up. DC United did not look ready for its game on Saturday night, which is even more frustrating after the fairly successful run in Charleston at their preseason tournament. After a day to try to calm down, here's my thoughts:
So which was it, the preseason was meaningless or the KC game was just a bad result? I'll abstain from the vote until after Saturday's home game with the Revs.
Other notes from around the league:
Posted by Longshoe at 10:36 AM 1 comment: